Stephen and Catherine Saia are the founders/owners of Sunset Slush - Classic Italian Ice®. They moved to Brunswick County, NC, in September 2002. Stephen is from Boston, MA, and Catherine is from Oakton, VA, a suburb of Washington, DC.

Stephen was a partner in the former ICON Marketing; now Koolabrew. Catherine has her Real Estate License and worked as the Director of Marketing and a Broker at Woodsong in Shallotte for four years. She is a former Board member of Communities in Schools (CIS) and the Brunswick Arts Council.

Both had careers in Telecommunications, prior to moving to Ocean Isle Beach. Stephen owned a Northern Telecom distributorship; following a sales career at Northern Telecom. Catherine was in Sales and Marketing for ROLM, a California based company that was bought out by IBM and then Siemens.

Both are proud of Sunset Slush® and the growth they have seen in the past 20 years. It has been exciting to bring a new product to this area and make it work. They both believe that their success is due to the superior quality of the Italian Ice and their willingness to work hard.

In January 2022, the Saias transitioned the business to the Sellers family. Devin, Drew & Susie. 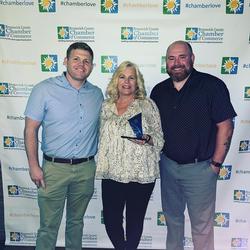 Devin first started working for the Saias in 2006 as a beach pusher on Ocean Isle Beach.

In 2008 Drew graduated from the University of Wilmington and could not find a job during the great recession.   Devin and Drew went to their parents Donald & Susie and discussed opening a Sunset Slush.  In 2010 the family opened a store in Holden Beach, NC.  Susie quit her day job to help open the shop.

In 2013, just days after Devin graduated from East Carolina University, Donald passed away.  Devin then moved home to help the family with the shop.

After 12 seasons of being Independent Operators, The Sellers then took over Sunset Slush in 2022.